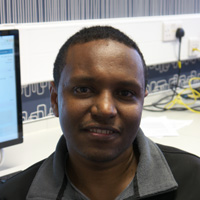 My name is Daniel S. Asfaw. I am from Ethiopia. I graduated in Electronics and Communication Engineering (BSc) from Mekelle University in 2010, and then I worked as engineer for three years. I studied Erasmus Masters, for a 2-year, with three institutions; Université de Bourgogne in Le Creusot, France, Universitat de Girona in Girona, Spain and Heriot-Watt University in Edinburgh, Scotland. Through this, I achieved his MSC in Computer Vision and Robotics (Erasmus Mundus masters) in 2015.

I joined Crabb Lab at city, University of London (http://www.staff.city.ac.uk/crabblab/#/) for my PhD in February 2017. My main PhD project involves investigating eye movements of patients with glaucoma.

Eye movements (EMs) are the most frequent voluntary action we make in our waking day, occurring more times per second than our hearts beat. A predominant EM is the saccade – the quick, ballistic action the eyes make as they move between fixations. Glaucoma detection and monitoring is done, mainly inadequately, in a clinic; a system that is likely unsustainable in the future. Instead of relying on infrequent tests in a clinic, focus should shift to capturing vision loss as part of a person’s ordinary daily activities. Our contention is that anomalies in EMs tracked during viewing of stimuli have the potential to be developed into a rigorous test that could be incorporated into an everyday activity, like something as simple as watching a movie.