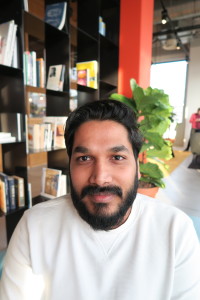 I am Gokulraj Prabhakaran. My fascination towards medical imaging laid the foundation for me to complete my graduation with a Bachelor’s degree in Biomedical Engineering from Anna University, India and  pursue a Masters (MSc) in Medical Imaging from the Royal Institute of Technology (KTH), Sweden. In my master thesis titled “Imaging memory encoding in Mild Cognitive Impairment (MCI) using fMRI”, I studied the neural substrates of successful episodic memory encoding in cognitively intact individuals and patients diagnosed with mild cognitive impairment (MCI) to improve our understanding of the pathophysiological mechanisms behind memory decline observed in Alzheimer’s Disease. Then I worked as a research scientist in Mahajan Imaging, India for three years, where I had the opportunity to explore my managerial and administrative abilities of running research studies, in addition to my scientific and technical capabilities. In January 2017, I joined the EGRET+ network as an Early Stage Researcher at the Otto-von-Guericke University, Magdeburg, Germany.

In order to get a deeper understanding of the mechanism behind glaucoma and its progression, it is important to study the disease from the perspective of both an eye disease and a brain disorder. With an already well established knowledge of retinotopic organization of the normal visual cortex, the major goal of this project would be to determine  whether (long term) deprivation of peripheral visual input observed in glaucoma compromises the structural and functional integrity of the visual cortex, using high and ultra-high field MRI and fMRI and computational models.