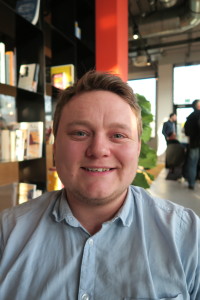 My name is Philip Wagstaff, and I am from the Yorkshire in the United Kingdom. I moved to Liverpool to obtain my bachelor’s degree in Biochemistry and my subsequent master’s degree in Biomedical Science and Translational Medicine, specialising in Neuroscience. During my master’s I studied various neurodegenerative diseases such as Frontotemporal dementia, Amyotrophic Lateral Sclerosis (ALS), and Huntington’s disease using both model organisms and cell models. Here I learnt many things, including making genetic knock-out models, molecular biology and viral techniques, as well as acquiring a deeper understanding about the fundamentals of research. My interests are focused around neurodegeneration and incurable diseases, such as Alzheimer’s, Parkinson’s and Huntington’s Disease. In November 2016, I accepted the position in the clinical genetics department at the AMC in Amsterdam to start my PhD project.

Several familial, monogenic and complex forms of glaucoma exist. For example, primary congenital glaucoma is a recessively inherited disease, caused, amongst others, by mutations in the CYP1B1 gene. Also, we and others recently found that the most common form of glaucoma, POAG, is caused by pathogenic variants in or near at least 65 genes, which are organized in four molecular pathways. These pathways are involved in (neural) development, lipid metabolism, neural disease and immune-related processes.

However, these pathogenic variants and pathways do not fully explain the molecular etiology or the variable expression of the disease in families and the population. In this project, we will genetically characterize over 1000 POAG patients, families and controls (GLGS and Lifelines) with a focus of identification of new disease genes in pedigrees and rare variants in complex POAG, molecular modelling and functional assessment. In selected pedigrees and in the population studies we will start selected gene (variant) analysis usually by Sanger sequencing followed by exome or whole genome sequencing. Genetic data will be pooled internationally, as usual, to gain power. We aim to find and characterized, where needed, new genetic glaucoma common and rare disease variants, improve the molecular modelling of POAG and other glaucoma disease types using bioinformatic integration of sequence, expression, and functional data.